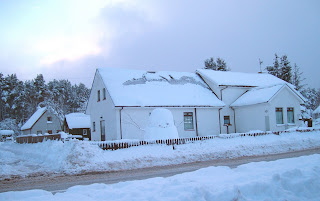 Well, I got my wish of climbing and scaring myself! Though I think I was suffering more from exhaustion than fear this weekend, and I'm sitting here typing, the day after, still knackered!
I had arranged to climb with Diana again this weekend, original plan was Saturday, but high winds made us change our plans to Sunday. Where to go though, considering that up Aviemore way had seen the biggest dump of snow for years and the NW had just gotten a big dump the day before?
Well, the Torridon Youth Hostel webcam showed that there wasn't *too* much snow pointing up towards Beinn Eighe, so I thought doing something like the Ling, Lawson and Glover route on Sail Mor might be ideal, or had thoughts of Sgorr Ruadh and Academy Ridge or heading across to Glen Shiel to Creag Coire an t-Slugain with the option of Forc 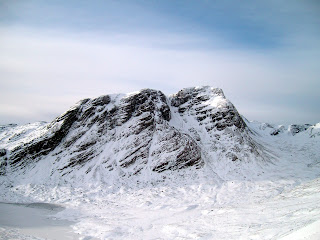 an Ridge if the clag was down. Diana was keen on Sgorr Ruadh, with the possibility of doing Post Box Gully if the Northerlies had blown the gully free of powder. I was dubious but happy as always to go have a look and we had plenty of options for buttresses and ridges if the gully was too dodgy.
The roads were a bit hairy coming from Diana's but she made it across to Andy's to pick me up and we arrived at Sgorr Ruadh carpark, leaving the car at 9am. The walk in was tough! Much tougher than I remember it! I must have been going good the day I thought that was an easy walk in. Even with the trail broken for us, my legs were still feeling the effort. Once up at the cairn, where the path splits off for Coire Lair there was no trail and the going got even tougher. It would be not too bad for a bit, then knee deep wading before falling into thigh deep drifts. When Diana was breaking trail, she fell into a boggy bit and the water went over her boots, soaking her feet. Hmmmm, not good!!! She was happy to carry on, thinking that the walk in would warm her feet and as long as we weren't hanging about at belays too long then she thought she'd be ok, hmmmmm.........We carried on though, foolishly!
Approaching Sgorr Ruadh, one passes the South facing cliffs on Beinn Liath Mhor. I had been attracted to one of the wee ridges of rock there and suggested that rather than ploughing on any further, we might go up and have a look at doing a new route instead. Diana was quick to agree! No way

was Post Box Gully going to be a good choice in these conditions and it was so hard going that even Academy Ridge was going to be very time consuming with it being 350m long and the other route I'd thought of, Riotous Ridge was away further up the glen.
Now we had a problem of how to get up to the Ridge. The cliffs face South and it had snowed on a North Westerly so the South facing slopes might be a bitty dodgy. There was a fair bit of windslab on SE aspects

You had it feckin easy Sonj!! That was just a wee stroll! I had to endure 8 hrs of bouldering kids at ED without doing any myself ;-)
I think RB would have loved it (and done quite well too)

Aaaaaaaaarg, not 8hrs of screaming, giggling kids who can climb harder than me!

I trust that Jaime kicked ass as per usual?