Where to go, where to go, where to go! The forecast high winds made a new route Andy had his eye on, out of the question and the thought of crowds upon crowds of folk on The Ben, all rushing up for the same routes wasn't inspiring. Lochnagar was a possibility but again lots of folk heading for the same routes and would involve an early start I insisted as no way was I climbing a gully with folk above me chopping ice down and being too slow. Andy grumped a little at the thought of one of my early starts and then I felt guilty at being so pernickity as to what I will and won't do! In the end we decided that we'd go to Aonach Mor as even though it was likely to be busy, con 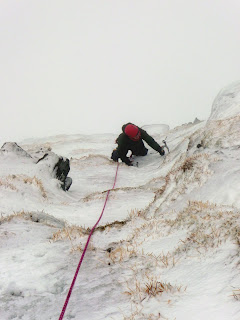 ditions were likely to be very good and with heaps to choose from that we could more than likely avoid the crowds.
God, I've forgotten was a slog it is up to the top of Easy Gully! The going was actually ok, bare of the sheet ice that I remember from my last visit up there but it's a steep slog and the top chair lift wasn't running so we had to walk a whole hour and a half, shock horror! 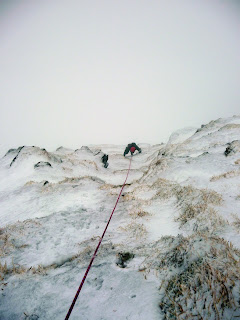 Wasn't long before we were gearing up though and ready to go. Peering over the top of Easy Gully, hmmmm, tis steeper than I remember it! Yes, I'll have the rope on option please! Over the edge I went, and it's not actually that bad at all. The only problem I was having was my blasted arms and shoulder. After down climbing just 10m my arms were going weak and my shoulder was hurting. Pissed off! How long have I had this stupid injury and how long have I had useless Physio which isn't making any difference in the slightest. I'm annoyed, but trying my hardest to resign myself to the fact that I won't be trying to lead any steep ice today. Frustrated but not going to let it spoil my day.
At the bottom of the gully we veer off away from the voices and clank of gear drifting in and out of the mist, for we have unclimbed ice to hunt out away from the popular routes. I am curious about the classics of course, but the thought of other people climbing and the lure of a new route is far too much to resist. And here we are at the bottom of the cliff, I'm anchored on and Andy starts off up a bulgy step of ice, looks nice, looks steep, are my arms going to cope with it? I start having my usual mental turmoil and chit chat, 'what if my arms are *too* sore to climb this? Is Andy going to be disappointed or annoyed if I'm in too much pain to continue? Is the belay going to be good enough to hold me if I fall off because of the pain?'
Andy is off like a shot though! Meaning the going is easy enough, so I stop fretting as much.
Funnily enough, my arms were fine, not a whiff of pain! My calf's however, aaaaaarg gaaaaawwwwwwwd they're screaming and burning! Because I'm so used to mixed and not ice climbing, and none of this front pointing business, my calf's just aren't up to it and I have memories of similar pain a few years back after doing The Web. Keep pushing on up though, battle 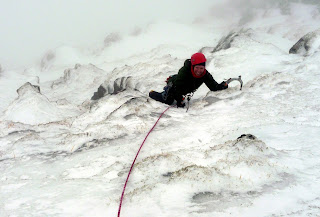 through the pain. A wee brief respite on a more stepped bit and Andy whips out the camera, 'c'mon, hurry up, need to keep moving!' Then I'm there, aaaahhhhhh pure relief!
2nd pitch isn't so steep, but oh my, look up above..................Cornice of Doom! It's big, it's overhanging and it looks mean! But thankfully I'm stood in relative comfort and I can let Andy deal with it (I can offer moral support from below if need be :oD 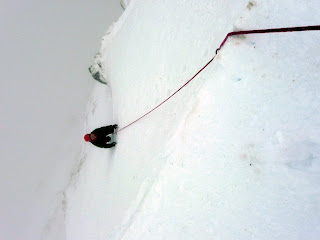