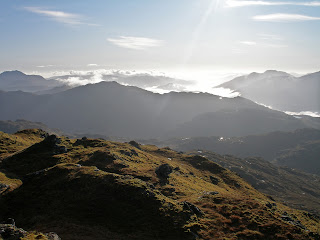 Nothing much to report on the blog front.  D and I did go and bag my last Crianlarich hill which was nice.  I've lost about 10Ib in weight and boy it makes a difference in dragging myself up a hill!  Not been out hillwalking for a good couple of months now and it showed in my stamina levels as I felt quite tired after just 6hrs!  That's half of what would normally tire me!  I'm eager for winter but half dreading it as I'm so unfit. 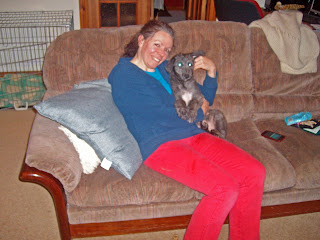 Not been doing any hill running whatsoever, in fact, I've not been doing much of any running at the moment.  I'm up at 6am every morning for the drive up to Aberdeen for 9am starts at Uni and I've so much coursework work at the moment that I'm knackered by the time I get home and just don't feel motivated to run.  However, D and I are now the proud owners of a Deerhound pup called Padaidh. 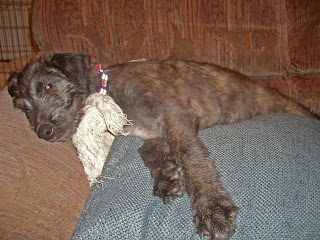 D was very reluctant to get a dog, but I feel that it would be good company for him during the day and although he always said he couldn't be bothered with the responsibility, I think it does him good.  And Padaidh is the most adorable pup in the world and is going to grow up into a big, gentle giant.  We had some initial hesitations about getting a Deerhound as a hill dog but I've been told by actual Deerhound breeders that people saying they can't get over fences is bollox and they'll easily clear 5 foot from a standstill.  These are Scottish dogs, bred for chasing deer! 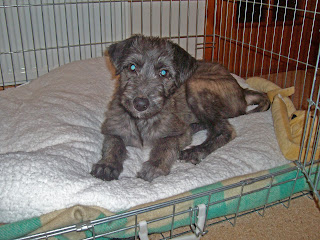 Still, hillwalks are a long way off.  Pads is only 9 weeks old today and it will be some time before he can manage a full day on the hill.  However, I can't wait till he's had his second jabs and I can take him out for longer and longer walks and have him out for a run with me.
Posted by Sonya at 07:50