Up earlier than usual (but still no need for Alpine starts!) to do the Point Signal du Mont Cenis (3162m) by its North ridge via the Col des Randouillards and the Pointe de Cugne.  This route goes at PD- but in this case the PD stands for POO Difficile rather than Peu Difficile!  Okay, it wasn’t quite as minging as the traverse of the Lessieres the other day, but the other day was just minging, but not particularly scary.  Today was scary!
We were following the guide book written by Andy Hodges and this boy really needs to get a grip with his imagination!  He described Lessiere like the Aonach Eagach which was a load of bollocks and he describes today’s ridge like a torridian ridge, again bollocks! 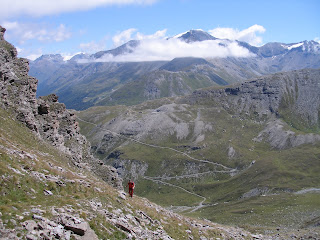 The day started off cold and the only time it was warm was on the ascent up to the Col des Randouillards which is a slog and a half.  There is a direct route up to the col up a grassy gully and I don’t know why the path doesn’t go that way as it would be a lot shorter!  Instead, the path zigzags backwards forwards, backwards forwards forever and ever and ever and up to the windy col (gusting 20 today supposedly, though I’m  not sure it felt that strong.)
The route from the col up to Pointe de Cugne is pretty gross, but just normal alpine ridge affair I think and we met another couple up there who only went that far.  It was pretty bloody cold up there and there was rime forming on the rocks and little icicles and patches of verglas here and there where drips had soaked the rock (thankfully avoidable unless you’re a dimwit like me and stand on a bit and have your foot go skiting, giving me an absolute shitter!) 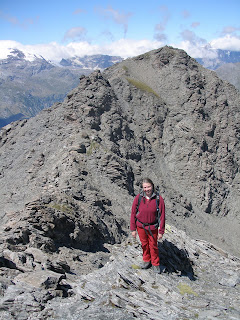 I think the ridge between the two peaks actually isn’t that bad, and I was just in a pretty negative frame of mind, because as I sit here typing this, I can’t actually think of why I found it so scary.   There were a couple of exposed steps and my balance over these wee narrow points isn’t great.  I found a lot of the downclimbing sections quite awkward with massive step downs and not much to trust your feet on.  Thankfully the schist is pretty grippy (who would have thought!)  My hands can testify to the grippyness of mountain schist, being a bit on the shredded side!  As can my favourite red softshell trousers!
So we get to the section of the ridge that I actually thought looked like the easier bit as the rock was cleaner.  Well it was cleaner but it was all fecking slab!  D scampered up the slab like a scampery scampering scamper, I didn’t trust my boots, too slippy for my liking!  So I went up a chossy groove to the side of the slab only to find I would have to climb a steeper wall above with no holds, uh uh, back down I go!  I found a little chimney midway along and decided I’d try and go up that way.  Thugtastic!  Grunts and knees all round thankyou!
There were a few other sections of scampering up easier slabs and short awkward downclimbs but they are pretty nondescript as I can’t remember much about them.  Save to say that Hodges guide says you can go round most difficulties, but going round didn’t look like a fun or safe option to me! 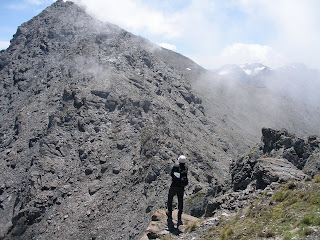 Eventually, after an easier section of steep walking on rock and mud, came what looked like the last ‘pinnacled’ section.  Easy enough going up, a bit on the chossy side but how to get down?  I didn’t actually peer over the edge as by this point I wasn’t really enjoying myself and was eager to be at the summit and at the end of chossville and scaryville so I just took D’s word that it didn’t look great.  I remember there was a section on Lessiere that he didn’t like the look of to downclimb and I went to have a look, going first and finding it commiting but easier than it looked.  I did wonder if this was the case today as well, but D said right at the top of the pinnacle was a sheer drop.  If you went more left there was a lesser drop with holds that he could see but there were overhanging so that you would be pushed out as you downclimbed.  This section was only around 3 metres high but took you down to a very exposed col, whereby if any hold snapped off when you were downclimbing and you weren’t lucky enough to land on your arse on the narrow col then it would be lights out time as you fell off the steep sided mountain.
None of this sounded very appealing to me at all, in my negative frame of mind.  In fact, even had I been feeling more bold, I’m not sure that section would have appealed.  I don’t mind soloing when things feel do-able but as soon as things feel risky, then it’s not for me.  And things can be risky but still feel do-able, it’s when you’re not sure of the outcome that I wouldn’t trust soloing.  Unfortunately, soloing we were and had no rope, otherwise we could have just ab’d down this section (if we could find something trustworthy to ab’ from of course!) 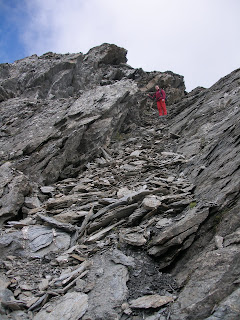 As it was, we tried to find a way around this pinnacle as suggested in guide.  There was a series of seriously steep and chossy mud ledges on the right hand side but that looked like death!  And the left side was too steep and cliff like.  In the end, we just decided to bail, first mountain I’ve ever bailed from and I feel a bit shamed that it was only PD, but better that that one of us slip and I was sick of all the choss and tired of having to concentrate by this point, just wishing the whole thing done with.
We had to back track and getting back down the previous pinnacle was interesting to say the least!  I went D’s slabby way rather than my chimney which I didn’t fancy reversing (and not sure I could have found it from the top anyway.)  So I slithered down the slab until I came to the bottom which involved a wee overhanging corner.  D was able to slither right to the edge of this, use foot holds on the side wall and just lower himself down, but I couldn’t reach anything useful!  In the end, we had to get D bracing himself at the bottom of the corner and use combined tactics to get me down.  Basically, I used his shoulder as a hand hold to enable me to reach my feet down far enough to manage the drop.  Job done! 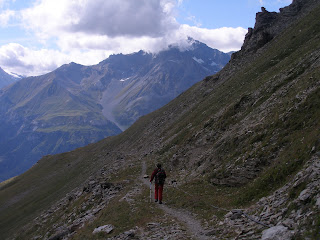 Another few easier slabby downclimbs saw us reach a section where it looked possible to escape from the ridge, down a horrendously steep scree and rocky slope and down to a path below.  We took the escape option!  As tedious as steep scree and rock could be it was far preferable to continuing back along to Pointe de Cugne and facing an unknown descent down its west ridge which might have been ming.  The scree was good enough in places to dig in with heels and glissade but only for short steps.  Just too steep!  Then you’d hit a bigger boulder section anyway and slip on your arse, sliding down on a sea of moving rocks for a while.  I was trying to zigzag my way down, finding less steep bits and more secure (ish) bits when I slithered down a large rock on my bum and my trousers got caught.  There was the rip to my arse!  Rats!
The slope wasn’t too bad going, just that 350 metres of it was getting tedious and tiring.  But before long we hit less steep ground, then more grassy ground, then the path.  I’ve never felt so happy to be on secure ground!  Then it was a boring, 2.5hr plod along a track, then a forest vehicle track back to the van.
Posted by Sonya at 02:18