At last I've been out climbing again and boy have I gotten seriously unfit!  4 weeks of not being out in the hills or doing any running has turned me into a slob!  So much so that what should have been 2 days at Lochnagar turned into just 1 day because I couldn't face walking up again in the wind after a windy day previously.  And the wind wasn't even all that bad, just it was NW rather than SW so we wouldn't have been totally sheltered.  I'm getting soft, soft, soft and need to harden myself up again.  Time for some physical torture in the form of running again to toughen myself up! 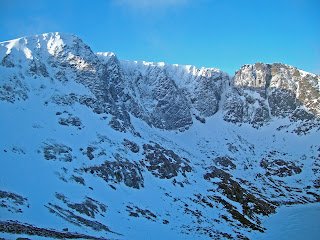 Anyway, H and I drove up to Lochnagar in the van on Friday evening, arriving in time to pop up a tent for H as I've been plagued by insomnia of late and would probably end up kicking and shoving her out of the cramped van bed.  We had a blether for a while, a cuppy, sorted the gear and then crashed pretty early for a 6am alarm.
It was blowin' a hoolie all night long and was blowin' a hoolie in the morning but it didn't take long to warm up on the walk in and strip off some layers and I was thankful that most of the ice on the path could be avoided, lest it make me grumpy!  We arrived at the Col in around 2hrs where we stopped to don crampons whilst being nearly blown over several times, then dropped down into the Corrie.  I was really surprised by how much snow was left.  The tops of the routes looked really snowy and the rocks were looking pretty wintery too!  We weren't getting the shelter I had hoped we would in the Corrie though and after much discussion we decided to do one of the shorter routes in the Southern sector and check out conditions on the route.  If they were really good then we would do a longer route, or Raeburn's Gully the next day.
As it was, as we got higher towards the Southern sector, the more we got out of the wind and it was amazingly calm at the bottom of the routes!  We would have been fine going for something longer, but we were there now.  I was peering over towards Central Buttress as it's always taken my fancy but I'm not entirely sure where the route is supposed to start.
We decided on a ** grade II called The Gift and I asked H if she wanted to lead the first pitch seen as she didn't get to lead much when she was out with me before.  She cruised it fine and placed the first bit of gear about 20m up after I reminded her she had a warthog she could place in turf.  I hadn't bothered with the ice screws and I'm not sure the ice on the first pitch was thick enough anyway, but my new stubby might have gone in.  H was laughing at me, saying I had all this nice new gear, my boots particularly and I wasn't using it.  I joked that maybe I never would as it would be a shame to get my new expensive boots dirty!  H's boots are a nice brown colour now, rather than the bright yellow they used to be. 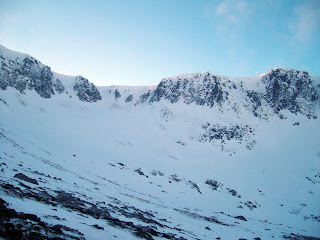 As per usual, H and I had a rope faffing moment!  I'd decided after our previous escapades to bring 2 ropes, but unfortunately one rope is only 40-45m and the other is 60.  So of course, H had nearly run out all of the shorter rope before she found a suitable belay.  I untied from the shorter rope and left her on the longer one as I could see she had the longer rope clipped into gear, although her top 2 bits of gear were on the shorter!  In the end it was fine, as me untying allowed her to climb another wee bit and spot a good belay, and I think there was around 10cm of shorter rope left in the belay device!  That got pulled through as she set up the belay and when she was safe and I was good to go, I just climbed up a couple of moves and tied back into the rope.
The ice on the first pitch was good in places and cruddy in others but the turf was stonking!  It felt pretty steep going for grade II and was really nice where the groove narrowed.  I was always making sure that my heels were down, I was keeping my legs relaxed and trying to climb in an 'A' shape.  The 'A' shape thing I liked but still my calfs were hurting and it was always good to get to a bit of softer snow or a more ledgy bit to stand more side on with feet.
I thought H had the meat of the route and there just seemed to be a wee snow slope to the top, so I just said I'd grab the nuts and be off, grabbing a couple of quickdraws as an afterthough, thinking there's no way I'd place even 2 bits of gear.  That was wrong!  Carrying up the slope, I saw that the top was further than it looked and there was an overhanging cornice, eeeeeeeeeeeeeeek!
'Holy sh*t!'  I deliberated, 'hmmmmmm.........'
I decided to climb up onto the tower of rock to the left instead, up a wee, steep groove and onto a snowy ledge.  Well the snowy ledge was a bank of snow that dropped into air below, but I decided not to look down again and just get a move on, albeit carefully!  I turned a slight corner, aiming for the top rocks, but first I had to get up onto another snowy mound to the right.  Once up there, I managed to bung a big cam in a crack, phew!  Then I decided that the rock there was too steep with not much for feet.  The rock to the left looked even steeper with a big granite bulge but underneath that there was a ledge for my feet burried in the snow.  I worked my axes up the big bank of soft snow above, careful not to weight them too much, working my feet up throught the soft now at the same time, a wee traverse back to the left, prayed my axes wouldn't rip through the soft snow, swing leg up onto the foot hold that I'd previously cleared of snow.  Worked up axes again, got my weight right over that good foot and felt safe, phew again!  Axes over the top and onto some bomber turf and there was a huge block waiting for me to belay H from.
It was far, far too windy to communicate so after pulling in the rope and giving 3 mighty tugs on the ropes, I felt that H was on the move.  'Oh my!' she said when she topped out, 'that top bit was scary!'
'Aye, tell me about it!' 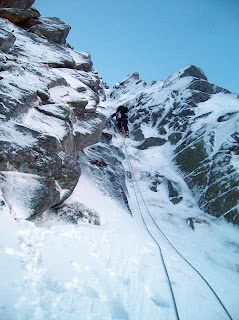 We bunged things in the sack quickly to get out of the wind, took crampons off as it was so wind scoured on top, but then decided to put them on again going down the 'ladder' path as it was so icy.  I kept them on until nearing the point where you start uphill again onto the main path and was glad I didn't have my new, sharp crampons on as there were rocky bits to cross too, but I managed to stick to mostly snow and ice.  We were back at the van in good time, for a cuppie and Jaffa Cakes.

We set the alarm for 5.30am the next morning, thinking that if the wind had died down we would do a longer route.  I was still hesitant about Raeburns, scared of the guide description of having to avoid a massive cornice!  And I became confused about the start of Central Buttress.  The guide says it starts up Shallow Gully but the topo diagram has it starting on the opposite side of the buttress!  So we decided to give it a miss until I could ask Andy about where the route started.  We thought we'd just go and do one of the shorter routes again and H was keen to have a look at a starred III called Gael Force Groove.

I was tired the next morning, but it dawned dry and there didn't seem to be any wind, so off we went.  The path was far more icy than it had been the previous morning and I wasn't sure if that was just because it was earlier or whether it was because it had been colder through the night, but I think it had been colder as it had seemed freezing sleeping in the van until I hunkered under 2 down quilts and my base layer and fleece jammies and down jacket and down booties (thank you Andy, I love those booties!)

I was finding the walk tough though.  My legs were hurting from the day before and the wind was hurting my face and making me feel dizzy and I had a slight headache from not drinking enough the day before, I'll never learn!  The wind was blowing fiercer, the higher we got and I realised not long after that the reason we hadn't noticed it below and the reason it seemed fiercer higher was because it had changed from a SW to a NW.  Big puffy clouds were puffing up over the Cairngorms and I thought it looked like it might even snow at some point.  My heart sank a little.  If the day hadn't been windy then I'd have kept going, but I just couldn't be bothered having to fight against the wind in the Corrie and being all cold and blustered on the route as it wouldn't have been as sheltered on a NW'erly.  We decided to head back down.  H was totally cool about it as she had plenty of work to get on with at home and knew we'd be heading out next week to do something good.

I've been kicking myself all day though!  The wind wasn't that bad at all really, I was just being really lazy and I felt worse when we passed 2 teams going up as we were coming down!  Not to worry though, I did one nice route, even if it was too short!  And I'm hoping to head NW next week, forecast willing.
Posted by Sonya at 12:41